This was made by a friend of mine in a few minutes at a burrito joint in Cleveland. We're thinking of exploring this little known art medium further. 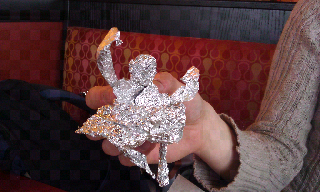 So, a couple of friends of mine have convinced me to start playing the game Mass Effect 2.

I eventually bought it on Steam the other day for $20.00, and have been playing it since about Friday. I only have 15 hours invested in the game Steam tells me, but it definately doesn't feel like I have nearly invested myself into the game that much.

I'm not the biggest fan of RPG video games. They seem to lack something that you get from playing the traditional paper and pencil games I can get immersed into. But Mass Effect doesn't have the long and dreary turn based combat, but instead a tactical live action third person combat system.

I like the basic combat system and powers. Taking cover and managing your team is quite entertaining (if you brought the right characters). But I don't seem to like how there seems to be combat just for the sake of combat. It's not really following a story sometimes, just enemies for you to fry. But besides that, I like it.

I like how all the character's abilities are not very complicated to understand as well. Easy to level up and customize gear.

One thing I don't really like in any RPG are cut scenes. They're usually long and complicated, making me think I'd be better off watching a movie than playing a game. Being able to interact with the cut scenes makes it so much more interesting (especially the paragon and renegade options you get at random times. Kicking some one off a building was pretty awesome).

But then there is the one thing that bugs me in the game. The story. It seems to be ripped from parts of different stories and pieced together to for the game. The main story seems similar to a movie I've seen called "Serenity" and the collectors seem eerily similar to the aliens from "Independence Day". Other things such as scenery and vehicals seem to be stolen from the original Halo game and some of it's offspring.

But these all had either good story, nemesis, game play, and scenery. So why would smushing them all together into a melting pot of sci fi RPG not be a good game? Well, it is good. I've been quite addicted to it recently. But I can't call it exactly original.

What makes the game is the characters and their interactions. They seem so much more alive than most characters you find in a game. They're all mostly memorable. Like those select few from other games like Cortana from the Halo games. They're fleshed out and given so much life that it makes them great just to talk with.

So that's all I have for now. I might give another update when I get more of the game done. As I have just bought another game, Formula 1 2011, it might be longer than expected. Also, I am an engineering student, so weekday gameplay is most likely out of the question.

So... Fenngineer. What does it mean? Well, Fenngineer is a play on words. Combining the school I currently attend, with my major. That is, Cleveland State University's Fenn College of Engineering with, well, Engineering (mechanical).

So what do I plan to write about? My thoughts generally. Thoughts about what though?

So why start writing now? Well, mostly, I have gotten a smart phone (or as I like to call them in a story I once wrote, Ultra Super Smart Phones). More specifically, I have gotten an HTC Evo Shift 4G. But, when playing with the phone, I found a blogger app, which I thought would allow me to read the blog I subscribe too. But when I found out that I can use it to write posts, well then I decided that there was a better place to store random thoughts than on Facebook.

So I find my self blogging now. But we'll see how long this keeps me interested and not bored really.

So why start babbling in a blog? Well, mainly so I don't annoy people on Facebook about the random big thoughts that I have. Twitter is great for such random thoughts. I like to think of it as micro blogging. But when I require more explaination, then I run out of options. So here I can put my lengthy thoughts down on keyboard and continue on my day.

I need a place to dump my thoughts before they build up into a kidney stone of the brain.

So a quick background on the Author?

Name's Alex, Intern. Currently studying mechanical engineering at Cleveland State University's Fenn College of Engineering. I've got a Girlfriend (GFy) of 2.75 years who goes to Case. I've got awesome friends, and terrible spelling. I'm a pisces, and my hobbies include everything that will be mentioned in this blog.

So that's the end of the intro.