Bruce Campbell's condition has deteriorated in the last 24 hours. His wound he received at the data center has become infected. He needs to get to a properly staffed medical facility quickly or he'll quickly succumb to septic shock. Ashley states that they should press on to Holy Land, where she suspects Bruce can receive the care he requires.
During the night Bruce's wife Sheryl has become hysterical. Her husband has slowly been slipping in and out of consciousness and appears to be in great pain. She hit the bottle and in a drunken stupor contemplates the idea of a mercy killing/suicide. Luckily Leia is there to help calm her down and she devolves a contingency plan derived by Bruce before the drip began. "He told me, if anything ever happened to him that would slow me down from getting South, I was to leave him with his bottle of liquor and gun by a tree. He didn't want to be the reason we never made it to this Holy Land."
During this explanation, they are interrupted by noises just outside the fire light. Two mountain lions appear and begin to stalk the people outside and where ever Bruce is resting. Two more join in from the other direction....

As they approach the location of Holy Land they start to stumble into more and more dense suburbs and city scape. As they crest over another hill they can see a large white sign on a far hill that says "HO LY", remnants of the former HOLLYWOOD sign. Below it, streets and buildings filled with military tents and vehicles. A Blackhawk helicopter can be seen parked on top of what looks to be a hospital tower. A slight shimmer can be seen in the air around the area, not unlike heat waves coming off the pavement during the summer. As they approach, military barriers have been set up along the perimeter of the city. Tons of people can be seen crowding around trying to get in, but it doesn't look like anyone is being let it. Large high tech radio towers can be seen sporadically around this area behind the barriers.

Approaching the USNG troops stationed at the openings in the barriers, state that this is a restricted zone and nobody can enter the CZ. Conversation with the USNG trooper is occasionally interrupted by the sound of shots in the distance, presumably the troops dealing with someone trying to enter without authorization. A large military APC is stationed nearby to provide support if necessary. If the name "Bruce Campbell" is dropped in conversation, the USNG troops immediately send a runner out to get someone dressed in a suit to greet the company and immediately ushers them into the CZ (clean zone) and to the hospital. Once it is discovered that this Bruce Campbell isn't the "Actual" Bruce Campbell, the suited man (Ken Howard) orders the removal of them group from the compound and to "Put the old man out of his misery."

Click here for information on the foes incorporated in this session. 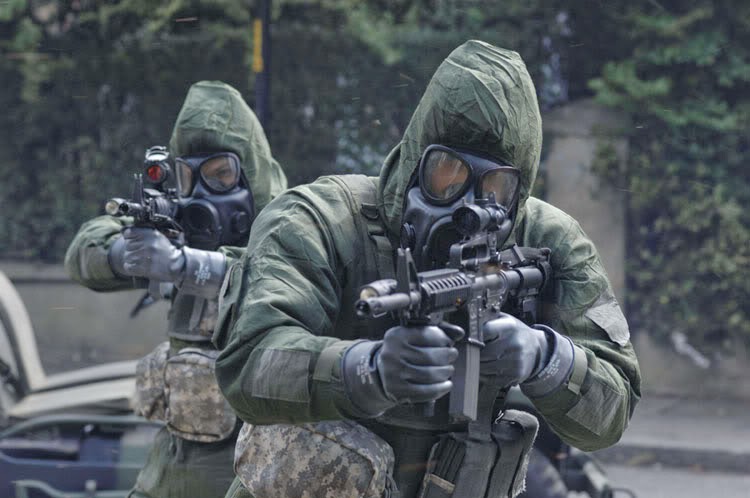