While I sit here avoid Twitter and Facebook, I decided to keep myself entertained by composing closing thoughts to my initial thoughts on the encounter building rules for Dungeons and Dragons, 5th Editions. After DMing a campaign that lasted from late June to mid November, running a game nearly once a week, I thing I gathered enough experience building encounters by the book. At the end of this post, I will also briefly discuss my thoughts on running a homebrew game in D&D 5e. But first with the encounter building rules.

In short, they're garbage. Complete trash that has killed off 7 characters over the course of the adventure. It feels like the CR system is flawed, either not fully considering an enemy's special ability or resistance. Half way through the adventure, after the party was decimated by a couple of lava slugs (reskinned fire snakes), I decided to just through out the encounter building rules and just eyeball it. This wasn't as difficult as it may have been for others, since I have become used to running systems that don't even include encounter building rules. Reflecting upon this, I should have reestablished the death ground rules. Originally, death was never off the table because I was stress testing the encounter building rules, but after not using them anymore, I should have reevaluated this clause. 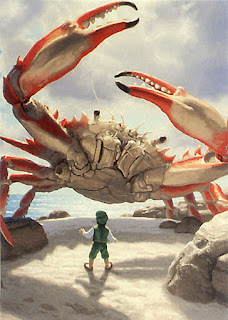 It was too much work to build these fair fight encounters using the rules, and I don't think that you should invest too much time into creating D&D combats by the numbers. A good rule that I ended up using was to build fights with creatures that could be eliminated in 2-3 hits (or more if less creatures). I think the game thrives on many little, one sided fights during a day rather then a few fair fights, though this also depends on the characters in your party. If you have short rest dependent characters, I think that these favor fewer fights, since they always seem to have some amount of power ready to go. In the more weaker fights, the long rest characters don't have as big of hurdles to climb if they've already used up their big powers. So basically, ditch the encounter building rules and find out what works for your party.

Now, my general thoughts on running a nonpublished campaign in the new D&D 5e system. A quick summary of the campaign would be a fetch quest to find a special rock in the desert. There are a few things that stood out as issues, and in the end very little that I can find as enticing. So I'll start with the good first, go onto my issues, and then things that fell flat at the table. The game does a very good job at making "mundane" magically items extremely useful and powerful. A simple +1 sword or resistant cape goes a long way without giving the characters too much crazy power. A +1 "magical" weapon will beat many of the resistance types that a ton of the monsters seem to have (resistance to slashing, piercing and bludgeoning from non-magical weapons).  While I do enjoy the backgrounds and etc. for the characters, player's with poor backgrounds ended up getting hosed.

One of the problems I have with D&D 5e is that the monsters seem very boring. Only a few monsters had entertaining mechanics tied to them, while most had a form of multi attack if they needed to be more powerful. Abilities like Pack Tactics were good, but go boring after a while. The best designed monster was probably the Zombie, who felt like an undead force with it's Undead Fortitude ability.

Another issue is that there seemed to be a definite power balance issue. Classes like the ranger and sorcerer seemed out matched by the rogue, fighter and cleric. And because each character's powers function differently on short and long rests, it became difficult to build encounters to the appropriate difficulty for the number they did.

Some of the players had issues with the backgrounds and etc. mechanic. Either forgetting that they had them or trying to stretch to fill odd ones. The worst were players who created their own backgrounds etc. and then found it very difficult to gain advantage from them.

Some of the players seemed to hate the trinkets. Nearly anytime they found some source of treasure, I would have them roll on the trinket table for fun. I figured they would like getting little random items that they could think of using in future predicaments. But it was mostly seen as useless junk, and extremely disliked.

So would I run another 5e game again? Yes, but it would have to be for a certain tone and setting. I think for a gritty fantasy game, I would run this IF the story I wanted to tell couldn't be done in the One Ring. I think everything that I like about D&D 5e comes from its gritty difficulty and feeling, which I can get most of from the One Ring. For more high fantasy, I will stick with 13th Age.

Sorry that this article was so choppy. If I would have written right after finishing the campaign it would have better flow and more links (or any).